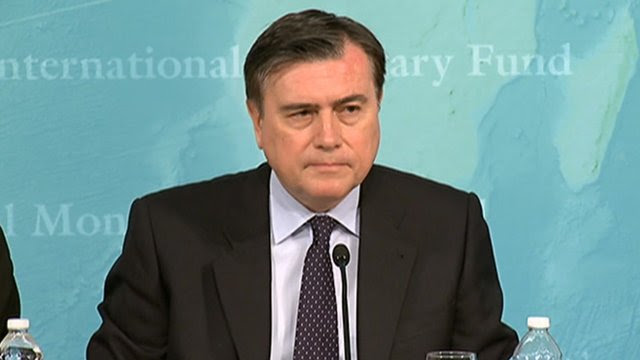 Jose Vinals, IMF: "A failure to address underlying tensions could precipitate a global crisis"
The world's economy is "deeply into the danger zone" because of risks from the eurozone, the International Monetary Fund (IMF) has said.
The IMF predicts the global economy will grow by 3.25% in 2012, down from an earlier forecast of 4%.
The growth forecast for the UK economy has been cut to 0.6% from 1.6%.
But the eurozone is set for a "mild recession" in 2012, with GDP expected to shrink by 0.5%, compared with a previous forecast of 1.1% growth.
Shadow chancellor Ed Balls called for the government to rethink its austerity plan in the light of the IMF estimates.
"Last year the IMF was clear that if growth undershot expectations then the British government should reconsider the pace of spending cuts and tax rises which choked off our recovery well before the recent eurozone crisis, pushed up unemployment and has seen borrowing forecasts soar," said Mr Balls.

"Now the IMF has slashed their growth forecasts and confirmed that growth in Britain will indeed be much lower than they expected. And they have called on countries with low interest rates, like the UK, to reconsider the speed of their spending cuts and tax rises."
In response, the government said the IMF predictions matched those made by the independent Office of Budgetary Responsibility, which informs government economic policy.
"The IMF has downgraded its growth forecasts for all the major economies, reflecting the deterioration in the global outlook since their last forecasts in September," said a Treasury spokesperson.
Continue reading the main story

Andrew Walker BBC World Service Economics correspondent
The IMF's economists says that growth prospects dimmed and risks sharply escalated at the end of last year.
They are now predicting a recession in the Eurozone, quite a pronounced one in the case of Italy and Spain.
The IMF expects some impact on the rest of the world, but the adverse effects will be strongest in central and eastern Europe, where there are strong trade and financial links with the Eurozone.
The report calls for decisive action by governments. It says most rich countries are now doing enough to strengthen their government finances, although it says that the United States and Japan do need credible plans.
But it also calls for some countries to think again about how fast they are cutting. It doesn't name countries, but it does look like the IMF is suggesting that Germany is trying to curb government borrowing too quickly.
"Their expectations for UK growth are in line with those of the Office of Budgetary Responsibility, and stronger than for the other major European economies."
Eurozone growth Growth estimates have been reduced for the main eurozone countries, including Germany, which is widely seen as the powerhouse of the region.
Germany is forecast to grow 0.3% in 2012, down from the 1.3% originally predicted in September.
France is expected to show 0.2% growth in 2012, down from 1.4%.
However, the IMF stands by its 1.8% growth prediction for the US, based on recent strong domestic data on jobs and manufacturing.
Risk of 'spillovers' Emerging markets, such as central and eastern Europe and Asia, could also be hit by the eurozone crisis.
The IMF said: "While these markets have been quite resilient to shocks and developments in major economies in the past year, recent indicators have weakened significantly and the general business climate has deteriorated."
The IMF said Europe's most pressing challenge was to restore confidence and put an end to the crisis in the euro area.
It added that world economies needed "decisive and consistent policy action" to improve the current financial environment.
"There are three requirements for a more resilient recovery: sustained but gradual adjustment, ample liquidity and easy monetary policy, mainly in advanced economies, and restored confidence in policymakers' ability to act."
Separately, EU economic affairs commissioner Olli Rehn said he expected a "moderate recession" across Europe in the first half of this year.
On Monday, IMF chief Christine Lagarde warned the global economy could fall into an economic spiral reminiscent of the 1930s unless action was taken on the eurozone crisis.
In its update to its September report, the IMF warned that the "United States and other advanced economies are susceptible to spillovers from a potential intensification of the eurozone crisis".